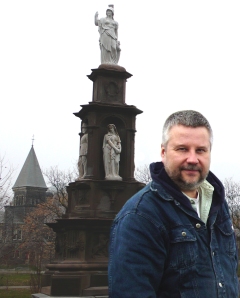 Peter Vronsky Ph.D. is an author, investigative historian, filmmaker and new media artist. He lectures in the history of international relations and terrorism at Ryerson University and is the author of several books including Ridgeway: The American Fenian Invasion and the 1866 Battle That Made Canada and the bestseller Serial Killers: The Method and Madness of Monsters, the definitive history of serial homicide.

The Canadian Volunteers Monument Campaign of June 1866, situated on University of Toronto’s campus just off Queens Park Crescent West is Toronto’s oldest public monument, erected in 1870 by Toronto citizens as a memorial to the Canadian Militia volunteers killed by Fenian Irish American insurgents in Canada’s first modern battle, fought at Ridgeway, Ontario, on June 2, 1866. Designed by Montreal sculptor Robert Reid, the Volunteers Monument became the center of a growing controversy over the history and meaning of the Battle of Ridgeway. In June 1890 on the 25th anniversary of the battle, the monument became the site of Canada’s first national military remembrance services, organized as an act of protest by Ridgeway veterans. Known as “Decoration Day” the memorial event was held annually in June until 1931, when an Act of Parliament established November 11 as Canada’s national military memorial day and renamed it “Remembrance Day”. In the process, the controversial history of the battle at Ridgeway was hidden and forgotten to the point that most Canadians have never heard of it. Peter Vronsky introduces the hidden history of the battle, the controversy that followed in its wake and the significance of the monument in that history.