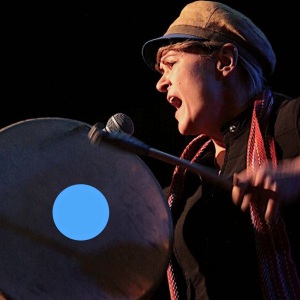 An Alberta born mixed-blood, multi and interdisciplinary artist, singer/songwriter and curator, L’Hirondelle’s creative practice is an investigation of the junction of a cree worldview (nêhiyawin) in contemporary time-space.

Since the early 80’s, L’Hirondelle has created, performed and presented work in a variety of artistic disciplines, including: music, performance art, theatre, performance poetry, storytelling, installation and new media. In the early 90’s, she began a parallel career as an arts consultant/advisor and programmer, cultural strategist/activist, and director/producer of both independent works and projects within national artist-run networks. L’Hirondelle’s various activities have also found her working in the Canadian independent music industry, as well as various educational institutions, the prison system, First Nations bands, tribal councils and governmental funding agencies, at both the provincial and federal levels.

L’Hirondelle’s performance work is featured in Caught in the Act: An Anthology of Performance Art by Canadian Women (2001), written by the late Âhâsiw Maskêgon Iskwêw, and edited by Tanya Mars and Johanna Householder. L’Hirondelle’s 2001 performative activity and corresponding website cistêmaw îyîniw ohci (for the tobacco being) are also discussed in Candice Hopkin’s book, Making a Noise: Aboriginal Perspectives on Art, Art History, Critical Writing and Community (2006). In 2004, L’Hirondelle and Hopkins were the first Aboriginal artists from Canada to be invited to present work at DAK’ART Lab, as part of the 6th Edition of the Dakar Biennale for Contemporary African Art, Dakar, Senegal.

In both 2005 and 2006, L’Hirondelle was the recipient of the imagineNATIVE New Media Award for her online net.art projects: treatycard, 17:TELL and wêpinâsowina. L’Hirondelle’s previous musical efforts have also garnered her critical acclaim with two Canadian Aboriginal Music Awards 2006 and 2007 for her contributions to Vancouver based Aboriginal Women’s Ensemble M’Girl. Her own first attempt in producing (and as one half of) the singing/songwriting duo Nikamok was recognized with a nomination from the Prairie Music Awards (now the Western Canadian Music Awards) and many of her songs have been licensed for television, documentary and feature films. In 2011, Cheryl was also nominated for a KM Hunter Award in Music.

Ever the visionary, she continues to come up with new ways music and her other artistic ideas can converge and in 2009 was recognized as an Honoree in the Net.Art category from the Webby Awards for nikamon ohci askiy (songs because of the land). From 2009 to 2011, imagineNATIVE Film + Media Festival invited L’Hirondelle to curate their first three new media exhibitions: Codetalkers of the Digital Divide (or why we didn’t become “roadkill on the information superhighway”), RE:counting coup and S-O-S3 (signals of survival).

She has also been involved in a variety of media arts initiatives including: SMARTLab UK Associate Researcher, 2005–07; Banff New Media Institute Advisory Committee, 2006; Canada Council Media Arts Advisory Committee, 1997–2001; KIDS FROM KANATA On-line Aboriginal Liaison (with Buffy Sainte Marie), 1995-96; and Drum Beats to Drum Bytes Thinktank, 1994. Cheryl is currently a member of the OCAD University Indigenous Education Advisory where she has also taught in their Integrated Media Department. She is one of the contributing writers in Coded Territories: Tracing Indigenous Pathways in New Media Art, edited by Steven Loft (2014).